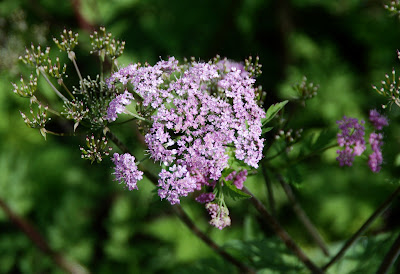 At the moment the hedgerows are frothing with white flowering cow parsley and a black leaved cultivar is sometimes found in gardens.  This delicate pink umbel is related but is much sturdier and flowers for far longer.  The leaves are held flat and are deeply cut and almost fern like.  They are a beautiful shade of apple green, slightly hairy and scented.  The flowers are a delicate pink and can last for up to three months.  It reminds me of pink champagne for some reason.  Perhaps because it is light, frothy and really rather delightful.

Chaerophyllum needs rich, moist, well drained soil and will be happy in the sun or partial shade.  The only attention it needs is in the autumn when any tatty foliage should be cut back and then given a good mulch of compost.  Very easy. 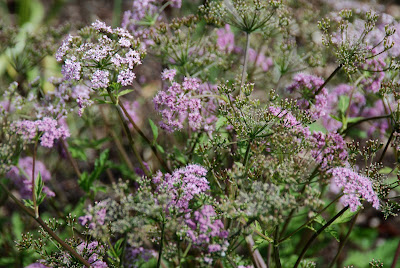 Chaerophyllum hirsutum ‘Roseum’ is a hardy herbaceous perennial which is native to meadows, hedgerows and open woodland from Spain and France to South West Russia.  The flowers are technically known as compound umbels, which means that they radiate from the top of a single stem and look a little like an exploding firework.  It grows to about 60 cm high with a spread of about 30 cm and will flower from April to June.

Posted by Colette Charsley at 10:00 No comments:

This is an unusual variety of a loved cottage garden style annual or biennial.  It has a delicate and understated beauty and deserves to be better known.  This perennial variety has beautiful, fragrant lilac-white flowers held above attractive heart shaped leaved which are deeply textured.  Once the flowers have faded the plant produces the typical fluttering elliptical silvery seedpods.  These will often stay on the plant well into the winter giving it a very long season of interest.  Bees and pollinating insects love it too. 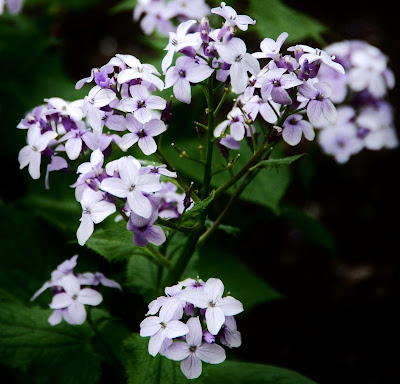 Honesty is a woodland edge plant so needs moist humus rich, fertile soil which is well drained.  It thrives best in dappled shade but will take some full sun if the soil is rich and moist.  It requires very little maintenance and is best suited to informal or woodland planting schemes.  To propagate either divide established plants in the spring or save and sow the seed. 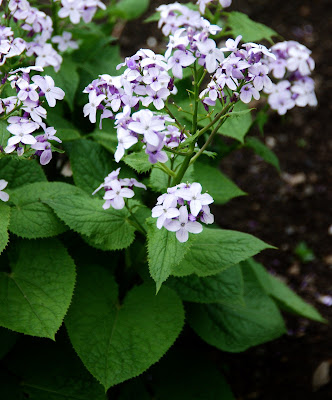 Lunaria rediviva is native to open woodland, forests and uncultivated ground throughout northern Europe and into Russia.  It is not native to the UK.  It is a clump forming perennial which will grow to about 80 cm high with a spread of about 30 cm.  It will flower from May to June with the seedpods appearing in the autumn and persisting into the winter.  Alternatively the seedpods can be cut and added to dried flower arrangements.
Posted by Colette Charsley at 10:49 No comments:


Imagine a planting area which you don’t just look at from a distance but which you can and should walk through.  There is something rather special about being able to get right up to plants and to be completely surrounded by them.  Steppe planting is open and allows you to wander amongst the plants and to create your own paths through them. 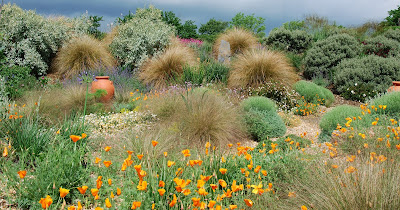 Steppe planting takes as its inspiration the dry rocky plains and hillsides of Eastern Europe and the Balkans.  It is wild and informal and is not defined by formal beds.

Ideally the conditions should be very free draining, with what would normally be considered very poor soil.  Low nutrient levels, grit, stone and even builders’ rubble are ideal.  The plants are mulched with gravel or grit which helps to conserve moisture and allows you to walk through without getting muddy feet.

The plants used need to be tough and able to withstand summer drought, wind and freezing winters.  They will quite often have silver or waxy foliage to help reflect sunlight and retain moisture.  The way the plants are laid out needs to be as natural as possible which means that they are spaced in small groups which are separate from each other.  This prevents over-competition for meagre resources.  As you will be walking amongst the plants there is no need to grade them by size as you would in a traditional herbaceous border with the largest at the back and smallest at the front.

Steppe planting will look good from spring when bulbs will flower – when you can literally tiptoe through the tulips - through to the winter when structure will be given by the forms of grasses and seed heads.  During the summer there will be a succession of brilliant flashes of colour as various species flower.

It is ideal as a low maintenance style as, once established, it requires little attention or watering.  Any plants that are inclined to self-seed only need the occasional thinning out if they get too numerous.

Any of the following species would be ideally suited and will give a long season of colour and interest. 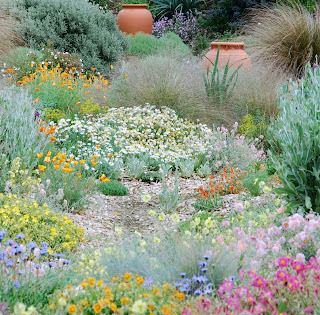 Posted by Colette Charsley at 09:10 No comments:


Plant of the Week – Pulsatilla vulgaris (Pasque flower)
Eye Candy Credentials - This is one of those plants that once seen is never forgotten.  The lovely ferny foliage is attractive in itself, but the flowers, which are out now are of a jewel like intensity which is in complete contrast to most of the delicate pastel colours often associated with spring.  And, if that weren’t enough, the stems are covered with silver hairs which glisten in the sun.  Once the flowers are finished the seeds heads are also covered in long silver whiskers which look a little like Old Man’s Beard with an ‘up-do’. 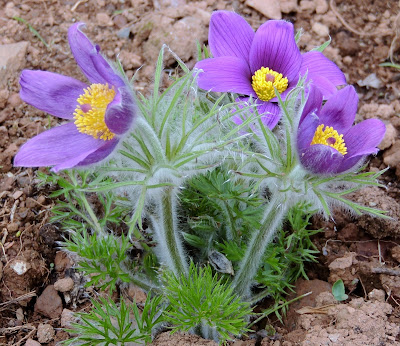 How to Grow - Pulsatilla need to be planted in fertile extremely well drained soil in full sun.  They are basically alpine so think rocky mountain slopes.  If necessary add lots of grit to help with drainage as they hate sitting in the wet.  Cold is not a problem.  When you plant make sure that you are sure of their position.  If you disturb their roots or try and move them they will probably die.  I have them at the front of a very sunny, gritty bed and mark their positions with little sticks so that I remember where they are during the winter and don’t accidentally dig them up. 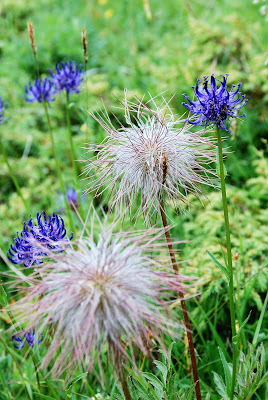 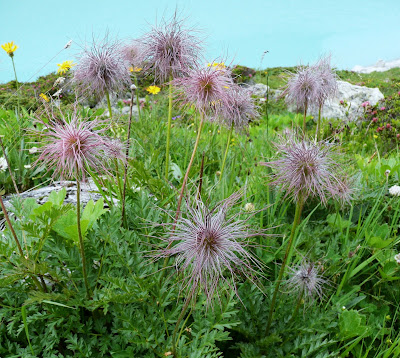 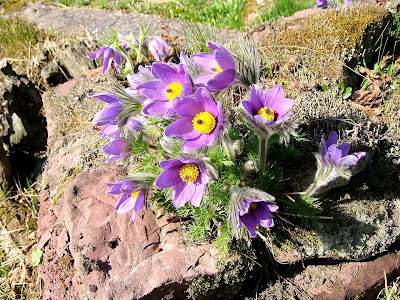 Technical Stuff - Pulsatilla vulgaris comes from the mountains of Western France to the Ukraine.  It is a clump forming perennial which will grow about 20 cm high and spread about 20 cm.  It flowers from April to May and the seed heads persist well through the summer.  It dies back in winter.  Do not eat it as it will cause stomach upsets and the sap may cause skin irritation.  There are various varieties including white and (almost) black flowering types which are worth hunting out.
Posted by Colette Charsley at 02:41 No comments: