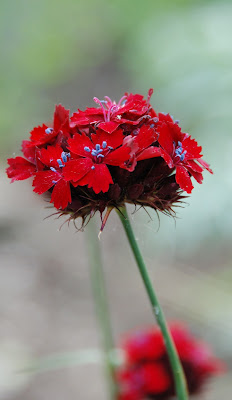 Dianthus cruentus qualifies on many levels.  The most obvious one is its colour.  As the English name suggests the flowers are blood red and the pollen is a dusky blue-grey.  Even when in bud the plant has a good structure.  Once the flowers open they hover above the evergreen blue/green foliage on airy stems like vibrant dots of colour and give dramatic definition to any planting scheme.  It is one of those plants that looks great on its own as a mini specimen or as part of a larger scheme.  An added bonus, but an important one, is that the flowers are particularly attractive to bees and other pollinating insects.

Dianthus cruentus grows best in full sun in light, well drained soil.  If the soil is too rich the growth may become floppy and need staking, so best to keep it a bit lean.  The one condition to avoid at all costs is winter wet as this will rot and kill it.  Give the plant a light trim once it has finished flowering to promote foliage growth.  In early spring the new shoots can also be trimmed to keep a tidy shape. 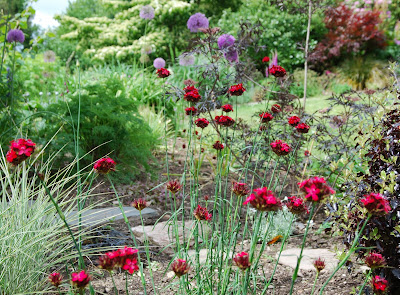 On its own in gravel planting or try it with these – Nepeta racemosa ‘Walker’s Low, erigeron karvinskianus, achillea ‘Taygetea’, Euphorbia cyparissias ‘Fens Ruby’ or ornamental grasses such as stipa tenuissima. 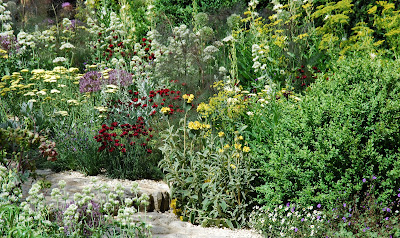 Dianthus cruentus is native to Turkey and the Balkan peninsular and is technically classified as an alpine.  It is evergreen and will reach a height of about 60 cm with a spread of 15 cm.  It flowers from late May to August.

Posted by Colette Charsley at 12:11 No comments:


When designing with plants it is usual to use groups or clumps or perhaps 3, 5 or 7 individuals to form a patchwork or colours and textures.

There is, however, a technique that can be used which utilises massed plantings of a single species punctuated by bursts of colour.  This is called Matrix Planting and uses one dominant plant to hold a scheme together.

It is a very versatile technique that works on large or small scale plantings and suits both rural and urban settings.

Another variation on this is called River Planting.  It works on the same principal of using a single species but is planted, as it sounds, as a river of plants running through a larger scheme.

Both styles rely on using very large numbers of the same species for overall effect.

When planning a matrix or river the choice of the body plant is critical to the overall look and feel of the scheme.  Colour is also important.  You either need to decide on a soft pastels or intense jewel colours.  Do not mix the two as this will not work and will look uncomfortable.

The species chosen need to be tough and have the ability to form good ground cover through a long season using foliage and/or flowers.

When you have chosen the body plant you then need to decide what to thread through.

Posted by Colette Charsley at 08:02 No comments: